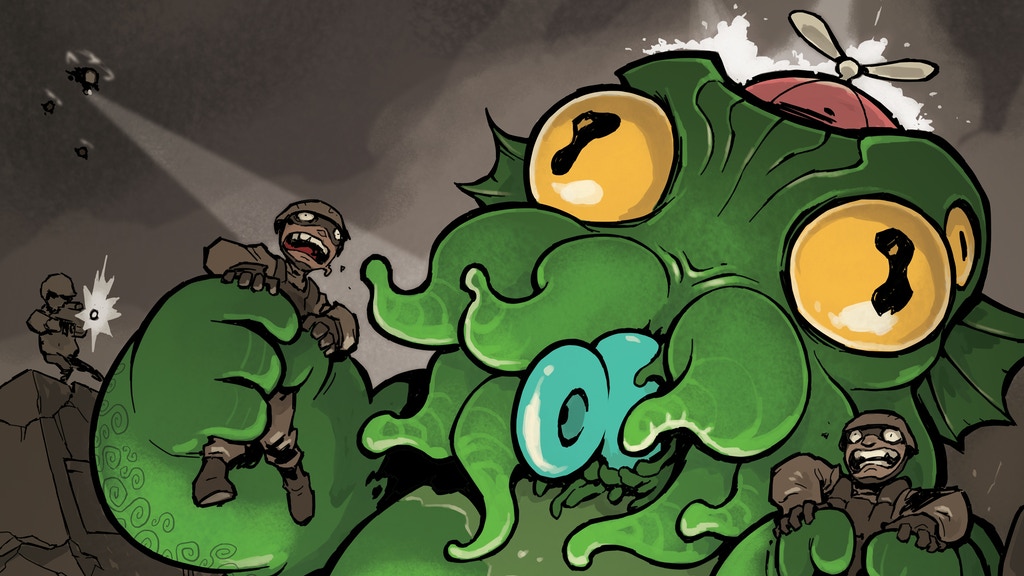 Now that we're past the massive surge at the beginning, and have settled down a little bit, I wanted to take a moment to thank you again for joining me on this journey. We're over halfway funded, which is GREAT for the first three days.

Cthulhu is Hard to Spell is a labor of love for me, and I strive to make it amazing for everybody. In fact, to improve on the quality of the book, I hired an editor to work with me on this campaign.

I've known Kris Simon for years, but I didn't know she was an editor who has worked with just about every big name creator until last year.

She really helped hone this book's message, cull the submissions, and keep me on track. Honestly, the thing she did most is just let me know that my instincts were correct. I've never worked for a big company. I've done everything myself, using my own instincts and ideas.

Kris came in and let me know that I was on the right track. She put everything in its place, and when she gave notes, they were the same kind of notes I was giving.

I've held the weight of Wannabe Press on my head for five years now, and these anthologies are especially brutal for me because they take an incredible amount of coordination. Kris helped shoulder that load and for that I am eternally grateful to her.

And I am thankful for you, because you believe in this project enough to help will it to life with me. I can't wait to share it with you.

Another campaign to check out

Shoddai is under siege in the fourth installment of Glow, a coming of age odyssey set in a world devastated by magic.

You might think this is an animated movie still, but it's actually from Glow, by Ray Chou, who is an amazing artist.

I got a chance to see the first issue of this book and some concept art at San Diego Comic-Con last year, and it BLEW ME AWAY. It looks exactly like an animated movie, and I just love it so much.

If you're into animation, fantasy, or just awesome comics that push the edge of what the medium can do, I highly recommend you check it out.

We just passed 400 backers, which means I'm introducing a new awesome bundle for this week.

The best part of getting into the campaign early is that EVERYTHING I unlock will come to you as well, including this awesome Quarantine Bundle,

The Locksmith #1 by Terrance Grace and Silvio Db

These will come once the campaign ends without you doing anything, just like anything else we unlock from here on out.

Just my way of saying thank you for believing in our little project.

Other campaign to check out

People hyped this campaign for YEARS, but it wasn't until the hardcover launched that I got to experience this book in all it's glory, and I LOVE IT. It's one of my favorite books going right now.

White Ash is an ongoing comic book series written by Charlie Stickney, with art and letters by Conor Hughes and colors by Fin Cramb.

Welcome to White Ash, a small smudge of a mining community in Western Pennsylvania, where the secrets are buried even deeper than the coal under the mountain. If you’re a fan of Supernatural, Twin Peaks or Lord of the Rings, you’re going to love getting to know our mysterious town.

I won't spoil it any more, but safe to say there are twists and turns galore. Highly recommend.

I have a really exciting announcement today. Wannabe Press is hosting its first-ever virtual comic convention this weekend from Friday-Sunday, and we're filling it with tons of Cthulhu is Hard to Spell creators.

So I figured that in order to take some control back in my life, I would just host my own convention and fill it with my friends. So, it's a combination of displaced ECCC creators and Wannabe Press creators, and we'll be hosting it Friday-Sunday from 12-4 pm PDT.

I hope you can join us as we talk about comics, give discount codes to our stores, promote the Kickstarter, and have a grand ole time. You can either sign up on the link to hear about it, or just follow us on Twitch.

Hope to see you there!

Another cool campaign to check out

Naiya and the Foxdragon: An Illustrated Fantasy Novel

The first time I passed Naomi's book, I literally stopped dead it was so beautiful, and now she's finally bringing all of her talents into an illustrated book that she's been working on since I've known her. I'm so excited for it.

Written and fully illustrated by watercolor artist Naomi VanDoren, "Naiya and the Foxdragon" is the first in a trilogy of fantasy novels full of adventure set in a lush tropical world.

Naiya is a young teen who has been hiding from her past and her unkind uncle most of her life until she befriends a foxdragon named Aru. When the last of the magic orbs that once powered their city is depleted, she faces her fears and embarks on an unexpected journey into the heart of the jungle to save her home.

Good for an adventurous someone of any age, "Naiya and the Foxdragon" explores the magic of leaving childhood behind, and that of when you finally start to realize the world around you is more intertwined than you first thought.

Hope you check it out.

I'm so super uber excited about it, and can't thank you enough. I was petrified to bring this sequel to Kickstarter, but it's going so well, and I'm so honored that you've stuck with me through all of this.

We're not there yet, but I can see the end in sight.

There is one more thing I want to talk about today. I'm doing something really special this weekend. Because of the cancellation of basically every big show because of Corvid-19, I've put together an awesome virtual convention with tons of artists and writers impacted by the cancellations.

It's starting today, and you can get more info below.

There are a ton of artists and writers coming on who are collaborators in this series, and I'm very excited for you to get a chance to see and hear them. Many of the artists will be live drawing, which means you'll get to see their process.

It's  100% free and we'll be streaming on www.wannacon.com, plus Youtube, Twitch, and Facebook. All the info is available at the link above.

Here is the panel and guest line-up for the next three days. I've bolded and italicized all the artists and writers involved with the Cthulhu is Hard to Spell series, and which volumes they contributed to.

3 pm PDT/6 pm EDT - Leah Lederman (none, but Leah is my long time editor for prose work) and Diana Levin

I think it's going to be a super amazing fun time, and I can't wait to share it with you. It won't replace Emerald City, but I hope it's at least a good time for everybody they can have from the comfort of their own couch.

I hope you'll join us at 12pm PT/3pm ET when the stream begins.

Another Kickstarter to check out

Beyond the Western Deep: Volume Two

I found the most charming all-ages fantasy comic the other day. It reminded me of Robin Hood, the old animated movie, which is one of my favorites, and The Dragon Prince. In fact, the creator calls itan all-ages fantasy adventure comic inspired by the Redwall book series, Disney's Robin Hood, Mouse Guard, and pretty much every 80's animated film that you felt like you watched a couple years too early.

That spoke my language, and I'm super excited to check it out. I hope you do, too.